Growing up in the South, I knew it was summertime when a big bowl of cucumbers in vinegar appeared on our table. Simple, sliced cukes (I like the small pickling ones) white or apple cider vinegar, salt, lots of pepper and a sprinkling of sugar. Nothing else like it! When the tomatoes are ripe on the vine, slice those along with some Vidalia onions and throw them on in with the cucumbers. The best trifecta.

This summer, on Martha’s Vineyard, the Northern version of summertime cucumbers shattered my Southern heritage a bit. I was invited to an outdoors jazz concert at Featherstone Art Center.  My friend provided the snacks, and I brought the wine. We put up our beach chairs and I opened a bottle of Vinho Verde, a light, perfect for summer, Portuguese white wine with a hint of bubbly. I recommend Casal Garcia. The label says “young and refreshing”….after a few glasses I certainly feel that way! 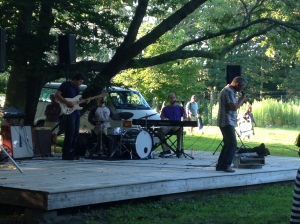 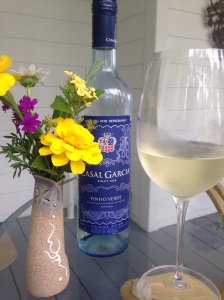 Renee opened her bowl of cucumbers laden with dill. After the first bite my cucumber horizons were expanded! They were delicious. A little hummus with chips and some fresh fruit rounded out our picnic fare. Combined with the music and our beautiful surroundings, this was one of my most memorable evenings of the summer – it was really the cucumbers that made it so.

So you decide…the North or the South? Or maybe we can just call it a truce.

Slice and peel cucumbers and add remaining ingredients. I use kosher salt and  course ground pepper. I have also used English cucumbers. Much of this recipe is to taste, so it’s all about your culinary creativity! Remember, some of the simplest recipes are the best. 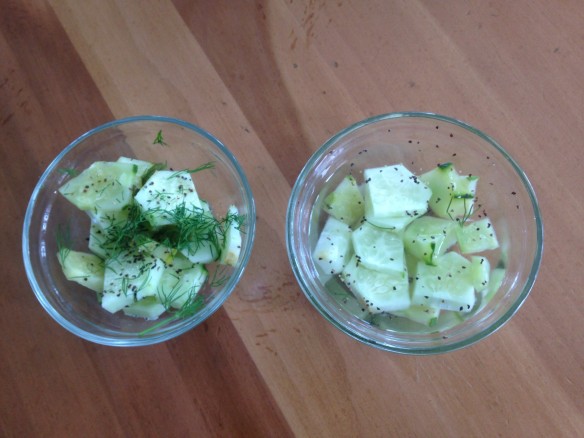